Anti-settling additives based on biopolymers 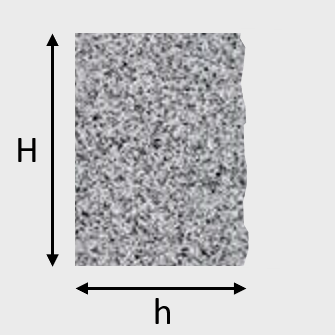 Compressive strength measurements on cement systems only provide useful results for slurries that are stable, i.e. slurries that have little or no sedimentation or free fluid generation.

Values may be generated for set cement from unstable slurries but as will be described below, the results may include artifacts.

As an example, consider a cement slurry that shows free fluid cured in a 2 in. (5.08mm) per side cube mould for compressive strength measurements.  The cube mould is filled with cement slurry (A).  During the setting period the slurry generates free fluid when static and the set cement does not fill the entire cube (B).  The height h < H.

API RP10B-2, 2nd edition 2013 recommends that cubes should be discarded if the height (h) < 1.9 in. (48 mm).  This corresponds to a 5% loss of height, which can roughly be translated to a free fluid value of 5% (note that the geometry of the cube mould, and the static time, is different from that of a free fluid test so there may be differences in the volume of free fluid generated) and an increase of 5% in the compressive strength.

For slurries that are cured under pressure the height may also be lower than ideal because of air entrainment if the puddling during the mould filling has not removed all the entrapped air.  If the reduced volume is entirely due to compression of air bubbles then there should not be any significant difference in compressive strength.

In a similar way, sedimentation of the slurry may lead to artifacts in the compressive strength measurements.  The slurry inside the cube mould (D) shows sedimentation, but no free fluid, as indicated by the increasing grey scale going from top to bottom.  In E the set cement has been removed from the cube mould and has been rotated to be in the position for compressive strength measurement.  In this position when the load is applied on the top and bottom faces (as in E) there will be an uneven stress distribution across the cement cube.  The highest stress will occur in the areas where the Young’s modulus of the material is the highest.  For a system with only cement this is likely to occur in the bottom most layer in the cube mould and to the left of the cube as shown in E.  Due to the uneven stress distribution the compressive strength test on this cube is likely to give a compressive strength value lower than that of nominally the same (e.g. with just an anti-settling additive included), but stable, system.

To ensure that compressive strength measurements provide reliable and useful results the cement slurry must be stable, i.e. the slurry must not have significant sedimentation or free fluid generation.  To avoid wasting time curing and testing non-representative cube samples, the slurry stability and free fluid should be evaluated following procedures detailed in API RP10B-2, 2nd edition, April 2013, section 12.  If the results do not meet the job requirements then the design should be modified, by for example, including an anti-settling agent, to increase slurry stability before determining the compressive strength.