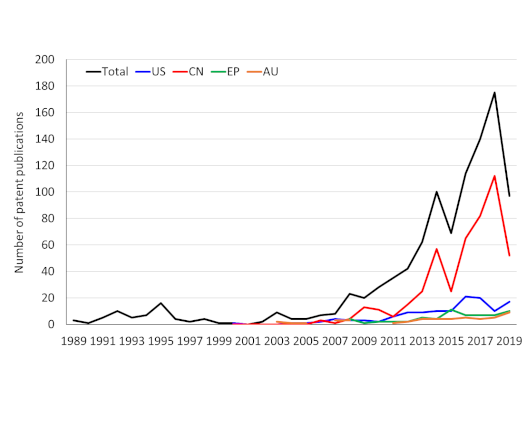 The graph above shows the number of published geopolymer related patent applications and granted patents per year for the last 30 years.   The methodology I used to obtain these numbers is described below.  The numbers for 2019 were taken on September 16th 2019, so the total for the full year is likely to be around 20% higher.

Although geopolymers have been around for a long time (the term geopolymer was coined in the late 70’s by Professor Joseph Davidovits (Geopolymer Institute) there was relatively little patent activity until 2005/2006.  (Note that patent applications are published 18 months after filing.)  There has been a rapid increase in patent applications filed since the mid 2000’s, with a large proportion of the increased activity coming from the Chinese patent office.  Most of the applications published by the Chinese patent office are from Chinese companies.

Given the timing of the increase the major driver is probably the desire to reduce carbon dioxide emissions associated with the manufacture of Portland cement, by finding alternative materials.  Geopolymers are one potential alternative, although the benefits are dependent on the formulation.  The alkali silicate component has a high CO2 footprint and its concentration must be minimised.  A discussion of the environmental considerations for geopolymer design is given by Davidovits in Materials Today

China is by far the largest cement manufacturer, producing almost half of the world’s cement.

The increase in patent activity is delayed a few years compared with the increase in technical peer reviewed publications, although as stated earlier there is a delay of 18 months between filing and publication of a patent application.

The patent publications were identified using the advance search function of Espacenet from the European Patent Office.  I selected the Worldwide database (patents from more than 100 countries), searched for geopolymer in the title or abstract, and then set the publication date (year) and publication number.

This method of analysis will double count patent applications and granted patents within a given jurisdiction.  Also, the same application filed in different jurisdictions will be counted multiple times.

Australia was included in the analysis as a significant amount of academic work was performed in the early to mid 2000’s by the group of Professor Van Deventer at the University of Melbourne.