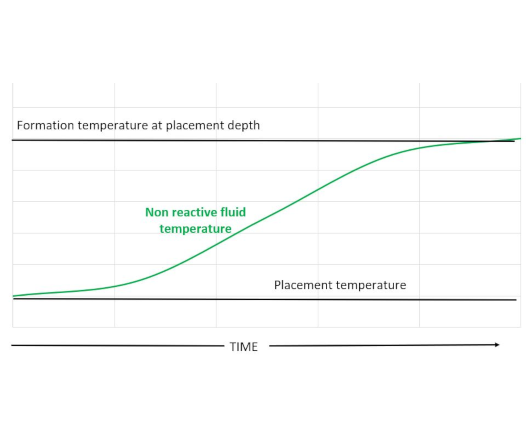 It is important to consider the thermal properties of thermoset resins when applying them to zonal isolation applications.  The key resin properties are the heat of reaction, the rate of reaction, and the coefficient of thermal expansion (CTE).

When resin systems cure significant heat is liberated in a relatively short time which can led to a significant increase in temperature of the resin and surrounding material (casing, cement, rock).

This increase in temperature combined with the fact that the CTE of thermoset resins is much higher (>4x) than that of steel or rock may lead to loss of zonal isolation.

Take the situation of mismatched thermal expansion coefficients and the effect of temperature changes in annular and plug configurations.

In the picture above the casing is surrounded by a material with a CTE higher than that of the steel.  If the temperature is increased, the material will expand away from the casing and create a micro-annulus.  However, as discussed in the chemical expansion case the material is confined at its outer surface by another casing string or by rock.  If the Young’s modulus of the rock is higher than that of the annular fill material, then the outwards thermal expansion of the material will be limited and consequently no micro-annulus will be formed.

If there is a temperature decrease in this situation then the annular fill material with high CTE will contract onto the casing but will move away from the rock or outer casing.  This may lead to generation of an outer micro-annulus.

However, if the material and casing are cooled the material will contract away from the casing creating a micro-annulus at the material/casing interface.

Temperature changes during curing or hydration

However, if the fluid liberates a significant amount of heat during setting then its temperature and the temperature of the surrounding materials may exceed that of the static formation temperature.  This is shown schematically below.

Key factors affecting the peak temperature are the volume of the setting fluid and the rate of heat liberation.  Large annular volumes and plugs give the highest temperature increases.  This situation is recognised in API RP 10B-3, 2nd edition, January 2016, section 7.1, where the temperature during strength testing may be increased if the cement thickness in the annulus >5 cm (effective diameter >10 cm).

Heat of reaction and temperature increase

At first sight one might consider that there would be little difference between the temperature increase during curing of thermoset resins and the hydration of Portland cement systems as their heats of reaction are similar.

The heat of hydration of Portland cement is from 320 to 380 J/g.  See for example Concrete Technology Today, Volume 18, Number 2, July 1997 from the Portland Cement Association.

The heat of reaction of thermoset resins will depend on the chemistry involved but is in general between 300 and 500 J/g.

However, the rate of reactions of resins and Portland cement systems can be quite different.  The full curing of thermoset resins typically occurs over a few hours once initiated. Portland cement systems take days to fully hydrate. Liberation of a given amount of heat in a shorter time gives a larger temperature increase. This is because there is less time for heat dissipation to the surrounding media.

A comment also has to be made about the mass of reactive material in a given volume. In 1 litre of an 1890 kg m-3 cement slurry there will be approximately 1300 g of cement and the rest will be water (580 g). The density of thermoset resin compositions (without filler) vary from about 1100 kg m-3 to 1400 kg m-3 , so there is little difference in the mass of reactive components in a given volume whether it is a cement system or a resin. However, the specific heat capacity of water is around 3.5 times that of thermoset resins so the temperature increase in the cement slurry will be lower than that of a resin formulation even for the same rate of heat generation.

One final point to make is that a significant amount of heat (~60% of the total) is liberated by thermoset resins prior to the gelation point being reached.  For Portland cement systems, the equivalent measure is the degree of hydration required for the percolation threshold to be reached.  This is a function of the water to cement ratio, but for typical oilfield designs this will be between 20 and 30% (Lavinia et al., “Prediction of elastic properties of cement pastes at early ages,” Computational Materials Science, 47 (3), 775-784 (2010)).

The amount of heat generated during curing can be reduced by starting with larger molecules or oligomers. However, the most effective way of minimising the temperature increase is to select a catalyst/crosslinker package that will allow the reaction to occur over many hours, thus giving time for the heat generated to be dissipated.

Thermoset resin formulations can include inert fillers such as silica. This reduces the amount of resin in a given volume thereby reducing the heat generated during curing.

Mineral fillers also reduce the coefficient of thermal expansion of thermoset resin formulations (McIlroy, H.M., “Linear thermal expansion of filled epoxy resins,” United States. doi:10.2172/4299891). However, even with large volumes of fillers the CTE is still significantly higher than that of steel or rock.