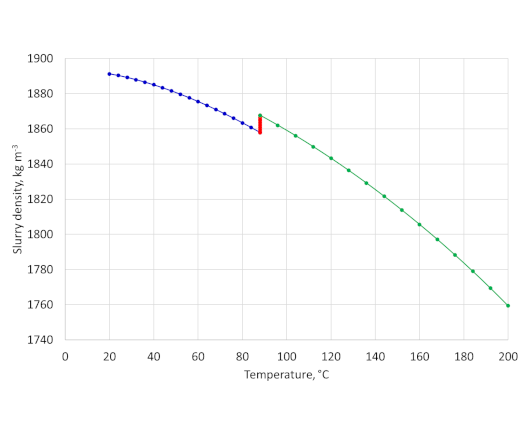 Have you wondered why the density of the set cement may be lower than designed in high temperature sedimentation tests?

Have you ever noticed that slurry has escaped from the top of the sedimentation tube during testing?

The API sedimentation test (API RP 10B-2, Second Edition, April 2013, section 12.5) is an important test used to evaluate the stability of a cement slurry in static conditions, i.e. once placed in the well. The laboratory test method consists of placing the cement slurry in a metal tube and exposing the slurry to appropriate temperature and pressure conditions until set. The slurry cylinder is then cut into segments and the density of each segment is determined. Differences in the density of the segments may indicate instability and the need to redesign the cement slurry. Please refer to the API procedure.

Depending on test conditions the segment slurry density may be lower than expected and/or overflowing of the slurry from the test cell may be observed. These observations can be explained by the thermal expansion of the aqueous phase of the cement slurry. The phenomenon is discussed below, using an idealised example; ignoring the minor contribution from the thermal expansion of the solids and other slurry additives.

Data for the thermal expansion and compressibility properties of water used in these examples are taken from the NIST website, using Fluid Properties under “Other data available”.

The slurry is formulated and mixed at 20°C and then conditioned.  For high temperature tests the conditioned slurry is placed in a sedimentation tube pre-heated to 88°C and placed in a pre-heated curing chamber.  At these conditions, the water has expanded, and the density of the slurry has decreased.

The change in slurry density due to the expansion of the aqueous phase under atmospheric pressure while heating to 88°C is shown by the blue line in Figure 1.

Now the sedimentation tube (heated to 88°C) is placed in a pressurised curing chamber and the pressure increased; 20.7 MPa (3000 psi), a typical laboratory value is used in this example. The API procedure recommends a minimum 3.45 MPa (500 psi), although this may need to be increased for curing temperatures above about 200°C (392°F) to prevent boiling.

The increased pressure (at constant temperature of 88 °C) compresses the slurry so the density increases (red line in Figure 1). In this ideal example, there is no entrained air in the slurry – puddling has been perfect!

The most important point to make is that, even though the density of the set cement may be lower than that measured for the starting slurry, the test method will still indicate whether the slurry is stable (no variation in density between segments) or unstable (significant variation in density between segments). As discussed in the API document (section 12.5.2.19) what is acceptable varies with the application.

At 88°C and atmospheric pressure the tube is filled with slurry so the relative volumes of slurry and cell are set to 1 (Figure 3). As pressure is applied at 88°C the slurry volume decreases due to the compressibility of the aqueous phase, but the internal volume of the brass cell remains effectively constant (brass has a very high bulk modulus).